In Uzbekistan, folk crafts, characterized by smooth lines, geometrically perfect patterns and harmony of shapes, differ in style and medium from region to region. On our site you will see a lot of interesting things, everything that is done by the hands of craftsmen in Uzbekistan! 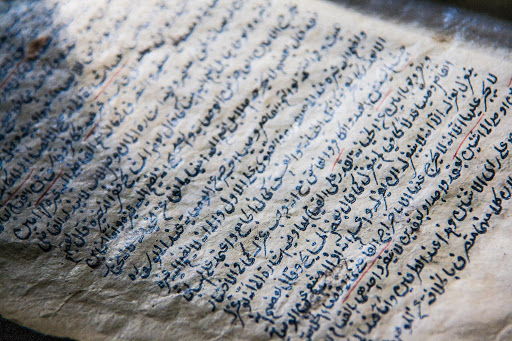 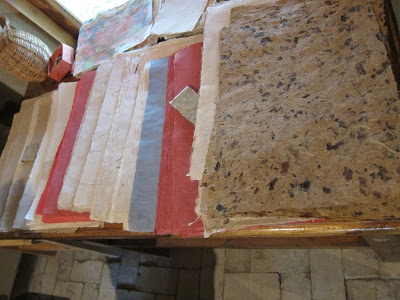 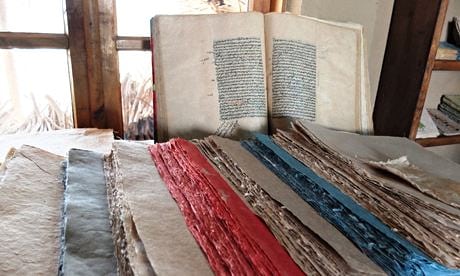 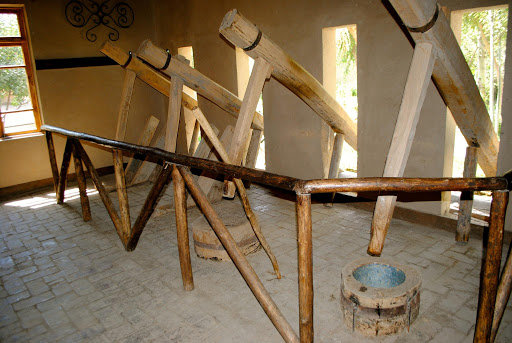 Production of paper from the bark of the mulberry tree (so-called " silk paper ") appeared in the 8th century in Samarkand. City became the first paper manufacturing center in Central Asia. Before this the locals used papyrus and parchment. But these materials were very expensive to produce and not heavy-duty. In 750, at the Battle of Talas Arabs captured among Chinese prisoners also craftsmen, who were moved to the suburb of Samarkand, called nowadays - Koni Gil. And here for the first time in Central Asia papermaking was founded.
Priceless manuscripts of eminent scholars such as Abu Ali Ibn Sina, Al Biruni and Al Fargani were written on this type of paper. And thanks to the unique quality of the paper, these manuscripts have survived till today.
Unfortunately, during the Soviet era paper production technology has been almost forgotten. Only in the early 90s of the last century with the efforts of the Association of Artisans “Meros“ in Samarkand was founded paper making workshop. With the help of UNESCO and the Foundation for Support of artisans (USA) near the town in the small village of Koni Gil was built watermill for the production of paper. The place was not chosen by chance, before here were also situated many workshops for the production of paper.
The secret of such kind of paper’s texture directly associated with a specific production method. Although the process of making paper at first glance seems simple, but in fact it is quite time and labor consuming process. 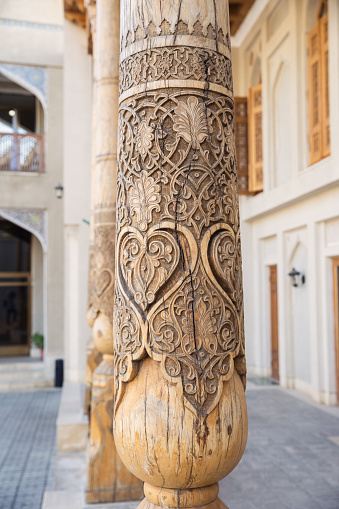 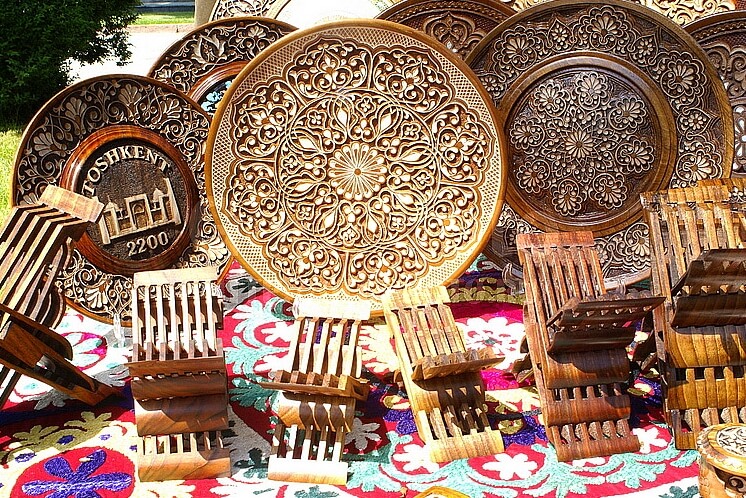 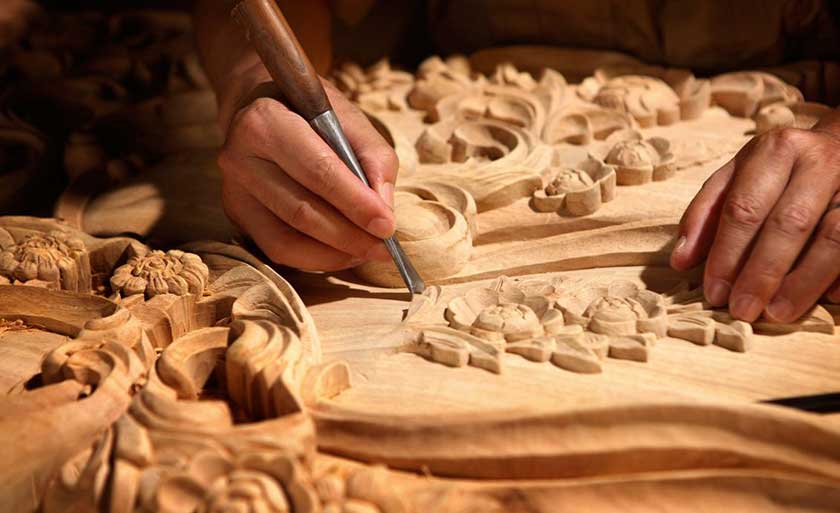 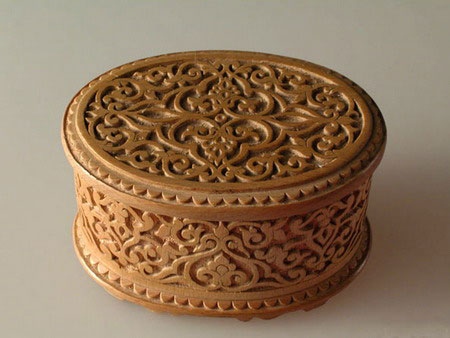 Wood carving is one of the oldest types of applied art in Central Asia. Archaeological finds and survived masterpieces of Central Asian School of architecture give us a fairly clear picture of the history of this craft.
Guests coming to Uzbekistan delight to see a great variety wood carving. For example backgammon and chess boards, boxes, cases and more. But especially noteworthy are the carved columns and lavh - bookstand for reading. Lavh - this is one or multi-position stands for the Koran, which are made from a single piece of wood.
In the Middle Ages wood carving became quite common. This can be seen by visiting the ancient mosques - carved columns, ceilings, individual elements of the decoration of the walls and niches of the room can tell a lot about the past of this art.
Due to climatic conditions of Central Asia, house facades have no windows, so the main decoration in this case is the front door. Always has been popular to cover doors with floral ornaments and cosmogonic symbols, for example the stars and the sun.
With the accession of Central Asia to the Tsarist Empire local masters also began to make tables, chairs, beds and other household items combining Oriental and Western styles.
In Uzbekistan carvers mainly use elm, walnut, apricot, mulberry tree. 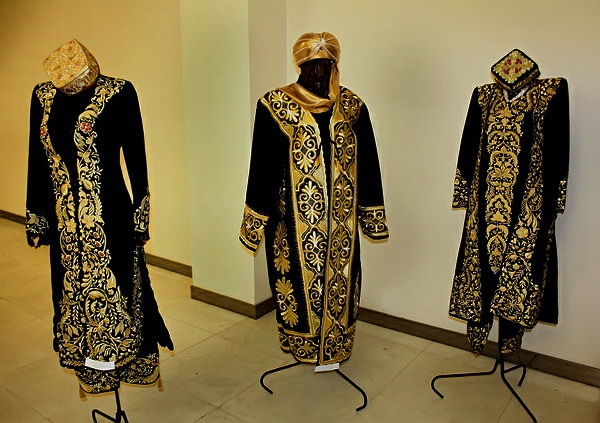 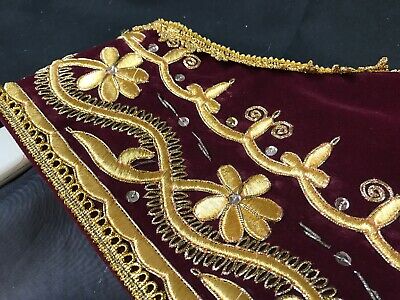 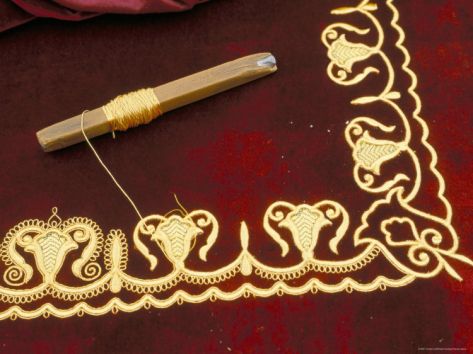 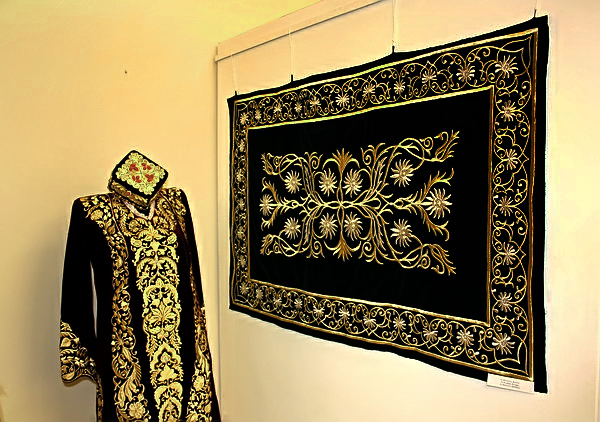 Art of gold embroidery appeared in Ancient Babylon. This art because of its beauty quickly spread from Babylon to other countries. Gold embroidery is known on the territory of Uzbekistan since ancient days. During archaeological excavations of palace in Afrasiab (modern Samarkand) were found unique frescoes of 7-8th century AD with the image of people dressed in elegant looking gold-embroidered dresses. This art especially blossomed at the court of Amir Timur in the 14-15th centuries.

But only in the 19th century this art becomes quite common, especially at the court of Emirs of Bukhara. Bukhara school of gold embroidery in reality is one of the most interesting and unique among others. A significant number of gold embroidery belonged to Bukhara emirs Nasrullo (1827-1860), Abdulahad Khan (1895-1911) and Alim Khan (1911-1920) is still preserved in museums.

At the end of 19th and beginning of early 20th century in the local markets appeared a great variety of different textile. Velvet was especially popular. Apart from velvet, silk and woolen fabrics, and even leather was embroidered. Velvet was mainly used for making embroidery on holiday dresses. Silk fabrics were used for light clothing, scarves and belts. Half silk fabrics, Adras textile, were used for the production of everyday household goods, such as praying rags, pillow cases. The most common colors for clothes were red, purple, dark blue, green and for children's clothing, especially red and purple colors were typical.

How those yarns were made? For the production of gold thread were used gilded silver threads. Production of them was already known in Babylon and ancient Egypt centuries ago. To Central Asia they were brought from India and Iran. Since the second half of the 19th Century, they were brought also from Moscow. In addition to gold, woven and unwoven colored silk threads were used.

Masters of gold embroidery in Uzbekistan produce amazing handmade products such as skullcaps, robes, praying rugs and more till today. Each product is a work of art. 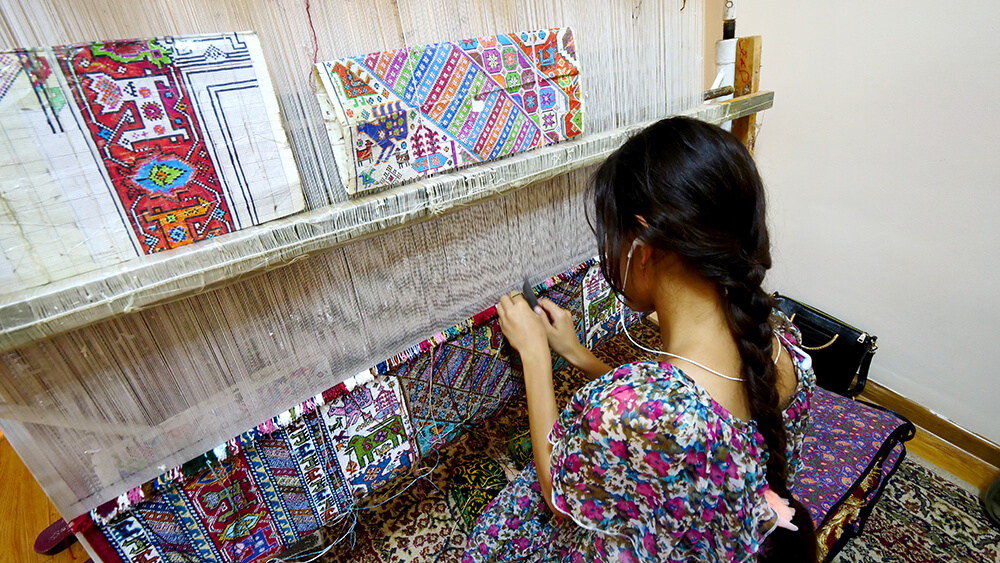 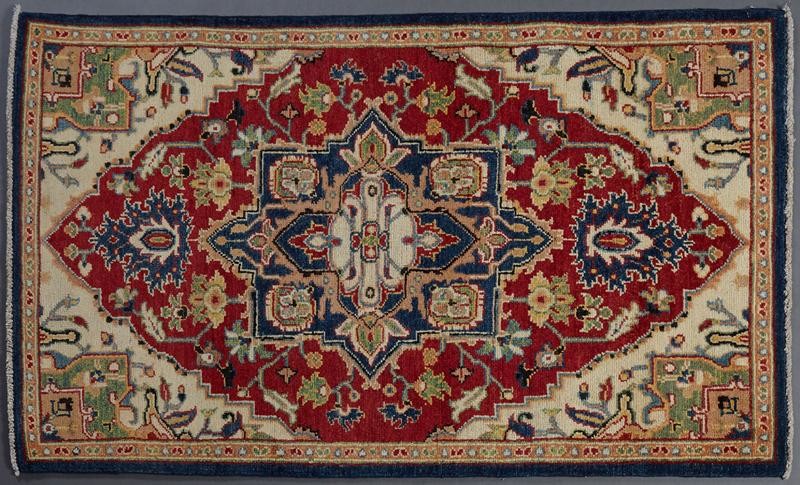 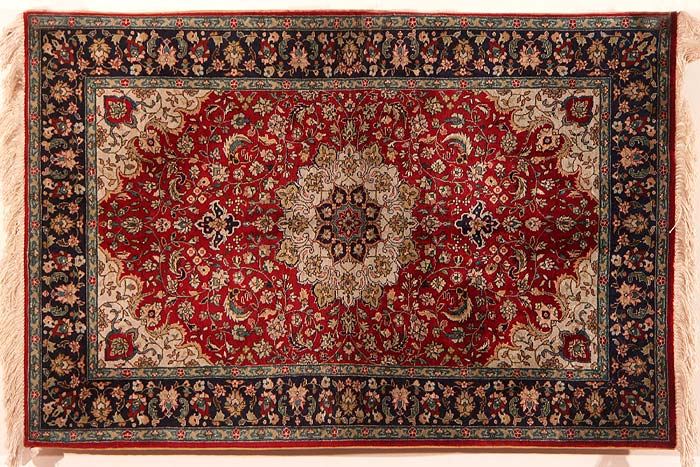 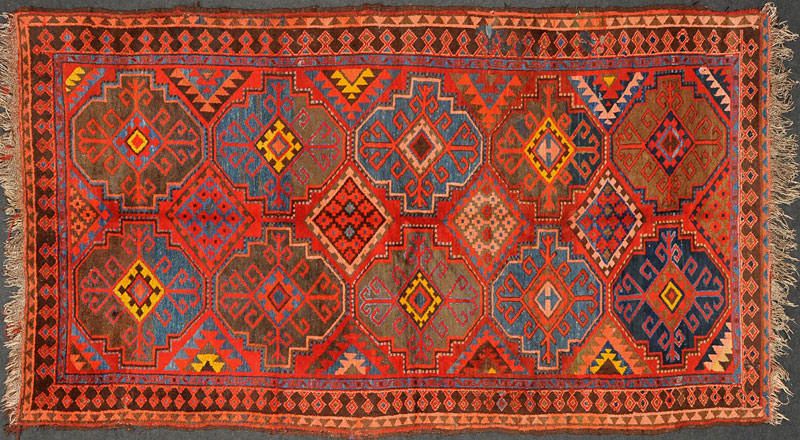 Carpet weaving is one of the oldest crafts in Central Asia. This art has been known since ancient times, evidence of this was found in the Altai Mountains during archeological excavations - woolen carpet dating back from 5-6 century BC. Carpets of Central Asian region differ by original ornaments using a rich palette of colors.
In Uzbekistan, carpet weaving occupies a prominent place in the daily life of the local population; it is difficult to imagine a house of Uzbek without carpets. The reason for this is the climate and customs of the region. People decorate the house with carpets, present and pass them from generation to generation. Carpets create a cozy atmosphere and comfort at home. Decor elements by local beliefs protect against evil things. One of the oldest types of carpet weaving is felt (felted carpet). Nomads used felt carpets for insulation of their yurts (portable house). Usually felt was painted in white, gray and dark brown color.
Modern Uzbek carpets are renowned for their amazing floral and geometric designs and quality. Since ancient days, the Uzbek carpets were one of the most popular goods on the Great Silk Road.
Depending on to the area rugs differ by color and ornament. Samarkand carpets are dominated by black, red and blue colors. Bukhara carpets are characterized by their multi-colored palette and rich ornament with the zoomorphic elements. Carpets with red and blue flowers are common in the Fergana Valley, and carpets with floral ornaments, you can see in Khiva.
Majority of carpets usually are made of wool, cotton, and much less of silk yarn. Special attention deserves silk carpets. Their production requires a lot of patience and skills. High quality silk carpets can have up to 1000000 knots per square meter, and the creation of two-sided carpets sometimes takes up to two years of hard work. Uzbek school of carpet weaving uses mostly natural dyes such as walnut rind, indigo, pomegranate and onion skins. And the king of natural dyes is saffron, which for many centuries were imported from Iran. Due to natural dyes, the colors of the carpets remain bright even after many years.
Uzbek masters continue to not only create rugs by the ancient technology, but also learn new methods of dyeing and weaving carpets. Oriental rug can be compared to a good wine - the older it is, the higher the value for connoisseurs. 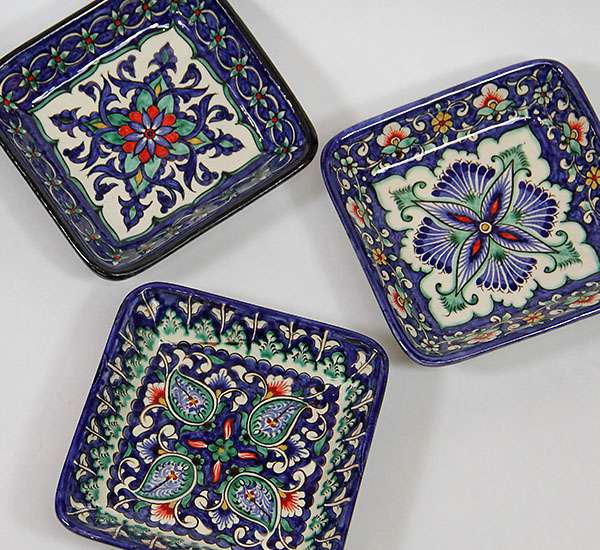 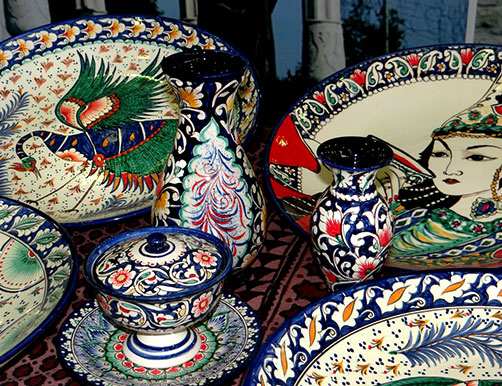 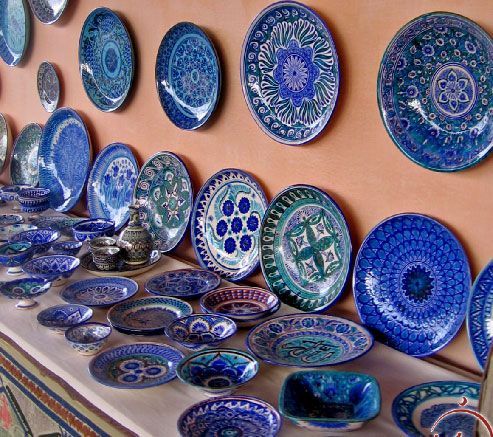 Archaeological evidences give us a reason to believe that the art of ceramics appeared in Central Asia 3-4 thousand years ago (the settlements Djarkutan and Sapalitepe). But if the first products of that era were rather primitive both in design and quality, already in 6-5 centuries BC in this art started serious changes. Excavations conducted by scientists have shown that it is the time craftsmen began to use the potter's wheel, which allowed producing fine, thin-walled products, rather rough, thick walled ceramic.

With the conquest by the Arabs of Central Asia ceramics production has received a new round of development. By the Arabs were introduced new designs, usage of glaze became widespread. Especially were popular floral patterns in combination with various geometric characters. Symbols like waves, stars and sun carried a mystical sense. Many ornaments of ancient days survived to the present day, although most of them in a modified form.

This glorious past in the history of ceramics is an inexhaustible source of inspiration for modern potters. Among the many schools of ceramics of the region especially prominent are: Ferghana ( Rishton and Gurumsaray ) , Bukhara and Samarkand (Samarkand, Urgut, Gijduvan ) and Khorezm (Khiva ) .

Uzbek ceramics school is rich in styles and patterns. Local craftsmen cherish and pass on to their students all the secrets of the craft. Ceramics of each region in Uzbekistan differs from each other. Ornament and shape of pottery depends on to local traditions, national cuisine. Even clay prepared in different ways: one master adds fleece into the clay, and other reed fluff. 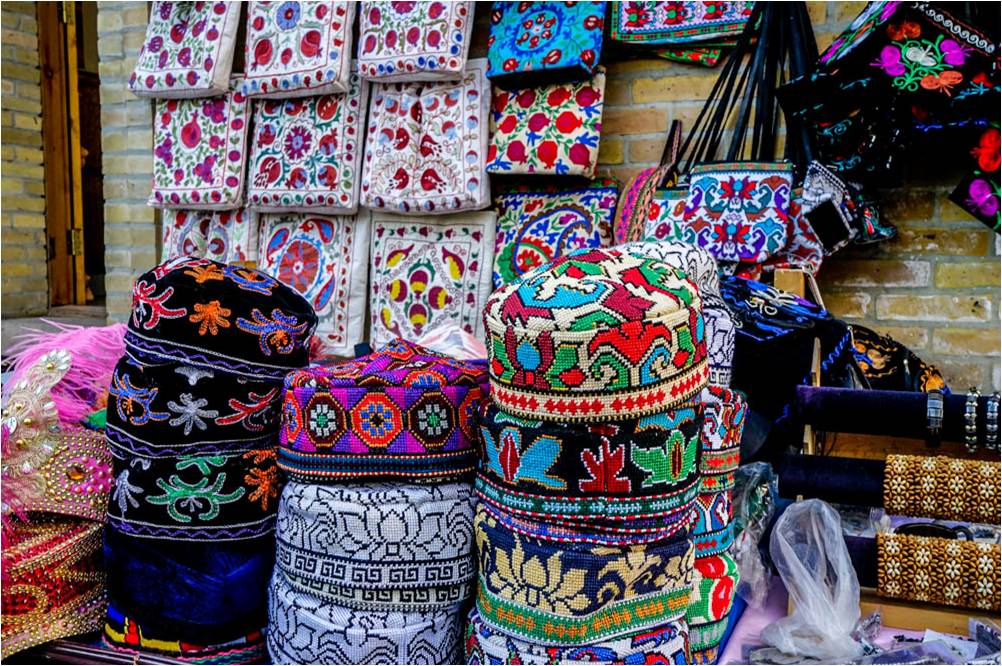 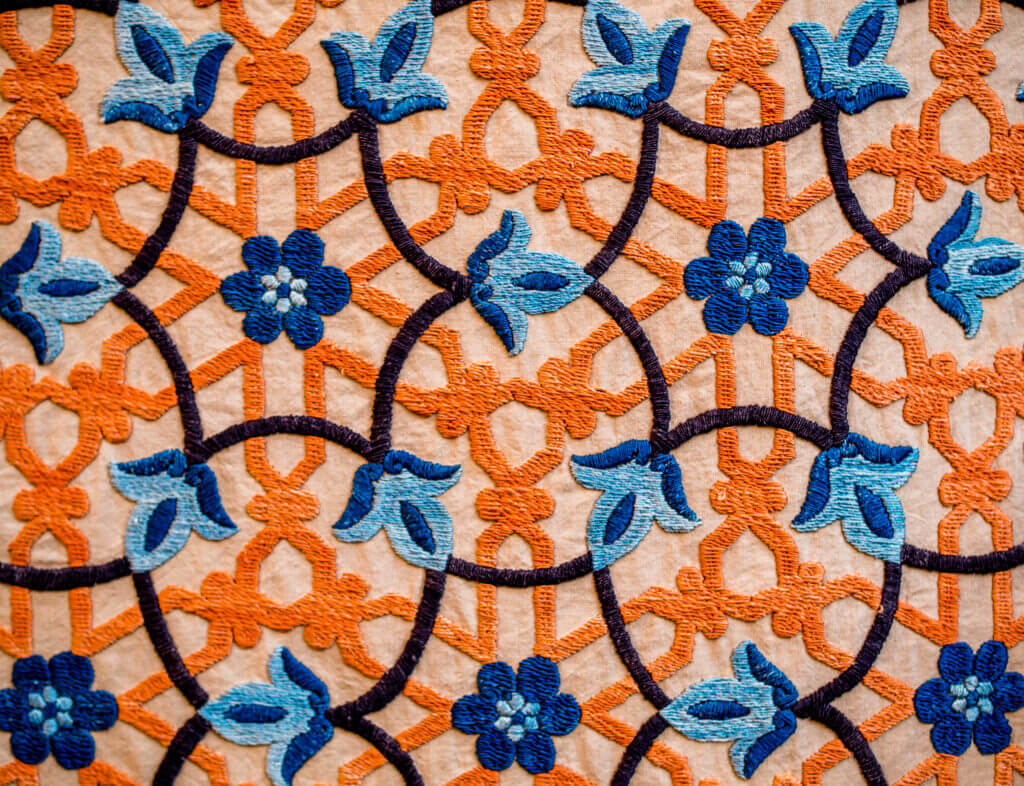 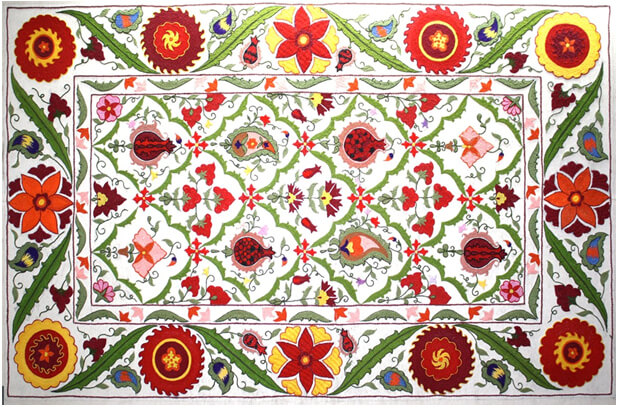 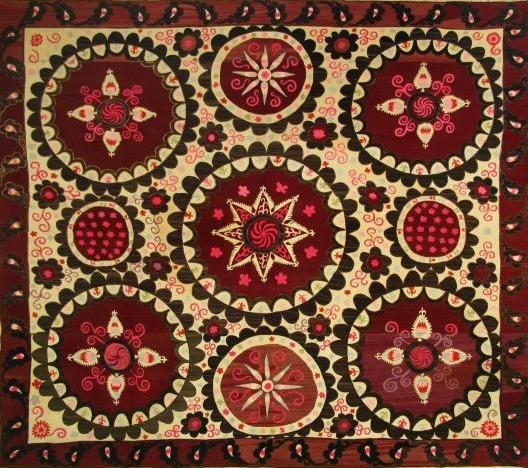 Suzane is the embroidery for the decoration of house. The name Suzane is derived from the Persian word «susan», translated as a «needle», so suzane means “needle work”. This art is known in Central Asia since the early middle Ages. Previously, the suzanes have been a mandatory part of the dowry, which were mostly made by the bride herself to decorate future home.

Suzane is one of the most elegant types of traditional Uzbek embroidery. Suzanes have survived from the late 17th century, are a real work of art and give a bright picture about the rich imagination and skilled hands of masters.

Embroiderers use silk, cotton and calico for making a base for suzanes. A thread for embroidering mostly made of silk. Some suzane almost completely covered with embroidery, of course it tells about a very laborious process. Because of that ladies were embroidering separate pieces of panel which later were sewn together. In this way, masters were spending less amount of time.

Ornament of suzane plays an important role. Uzbek schools of suzane, such as Bukhara and Kashkadarya use for decoration cosmogonic symbols - the sun, the stars. Often we can see also images of birds, especially the hoopoe, which was revered as a holy by the locals. Scorpion was considered as a talisman of the house, especially for young families. And, of course, the most popular was floral ornament describing a stylized flower and pomegranate.

Natural dyes such as onion peel, saffron, indigo and many other keep the beauty of suzanes for many generations.

Nowadays suzane as a decoration for the walls practically disappeared in the big cities, but, nevertheless, in the villages and small towns this kind of art is still preserved. Nowadays people use suzane more as a bed cover, table cloth, etc.