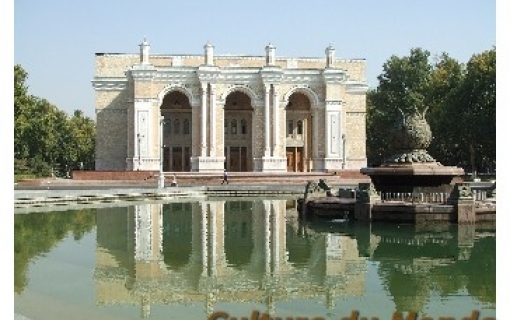 According to the plan of the architect, each foyer inside of the building like: Tashkent Hall, Bukhara Hall, Khorezm Hall, Samarkand Hall, Fergana Hall and Termez Hall has its own style that reflects the architectural motives of regions. In Bukhara Hall one can see a ganch carving, which resembles the interior of the summer palace of Said Alimkhan. The panels of the Samarkand hall are decorated by two-layer carving – “islimi” similar to the Middle Ages. Khorezm hall is decorated with carved panels of ganch that looks like wood carvings typical for the region. For Termez hall is characteristically decorations similar to the palace of Termez rulers. The halls and lobby of the theater are also decorated with murals created by such masters of Uzbekistan, as Ch.Ahmarov, A.Tatevosyan. In 2012, the building was closed for renovation, which lasted 3 years. As a result of the tremendous work done by the masters were completely renewed engineering and communication systems including heating and air conditioning. But also at the same time by masters was spent a special attention to the preservation of the authentic decor.